When Pam and I were cruising in our sailboat, we stopped for a couple of years in American Samoa starting in 1998 to work and reload our cruising dollars.  While there we became friends with Michael and Kendra who were getting their boat ready to go.  Michael gave me a handful of white LED’s and resistors and I soldered them together inside a 35 mm film can with a 12 volt lead.  That became our cockpit light for the next six years with lots of light and hardly any power draw.

In 2004, Michael and Kendra started an LED lighting company in Fiji, called Bebi Electronics.  They provide needed jobs in the local community and offer some pretty cool lights.   Most of their products are for the marine market, but several fit right in on an Airstream. 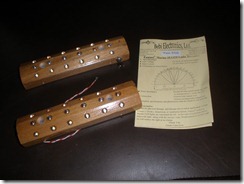 I’m using two Fautasi lights mounted below the overhead lockers and lighting the galley.  The name is from the Samoan racing canoes that are powered by lots of people power. 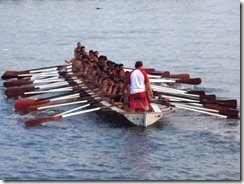 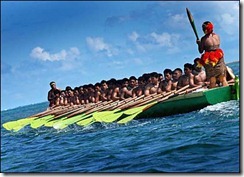 They’re 18 LED, warm white, handmade, and mounted in a native hardwood from Fiji.  They bring back memories for me since they do look like a fautasi. 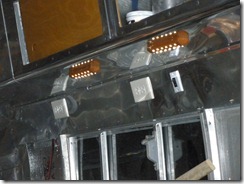 These two lights are controlled through a small toggle switch on the light on the right.  My galley now has plenty of light.

I’m now done installing lights, except for one reading light by the bed where I’m still unsure of position.  Everything is LED.  Since the days are very short and I’m sometimes working after dark, I now know that I’ll have plenty of light, everywhere in the trailer.