A New Beginning with Another Ride on a Ferry

Last Thursday I said a bunch of goodbyes—didn’t lose it until the last one late in the day.  Pam and I had moved onto our sailboat nearly 24 years ago in Blaine and there are a lot of friends there.

Friday, Brissy and I hooked up Island Girl and made the short trip to Deception Pass State Park.  Haven’t camped there since sometime in the early 80’s when I did it by bicycle and it is still just as stunning. 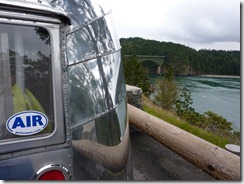 The bridges were in part a Civilian Conservation Corps work project during the Depression. 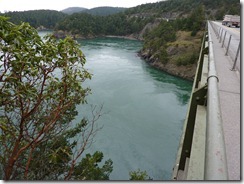 Of course it was windy and rainy just as soon as we found our campsite, but that was OK. 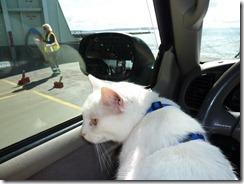 On Sunday while waiting for the Port Townsend ferry one of the crewmembers  asked about the trailer.  That worked out well as we were first on the ferry with Bris looking out to make sure nobody got too close. 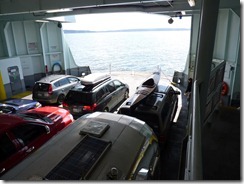 We were headed for a little county campground just south of Port Townsend called Oak Bay where I’ll be the host for the season.

The flamingos have landed and the anchor is down, so we’re all set. 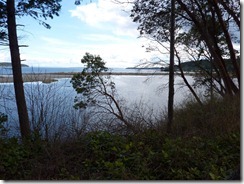 The campground was also a CCC project during the Depression. There are also a few campsites on the spit in the background.  Lots of birds,  a view of Mt. Ranier on a clear day and a pretty fantastic place for my kayak.

I’ll be here all season but should be able to get away to the Olympics a few times.  Feel good about it and think it should help me as I continue through the grieving process and start to put my life back together again.  Things are OK.   Hopefully we’ll see a few Airstreams in here this summer.