I don't have a TV yet and my buddy that does was leaving, so the trailer had to go to the welder before he was actually ready to start on it. I've been having bunches of fun doing Hehr standard windows (9 of them on a Caravanner) while I've been waiting. They kill time really well as they take 5 or 6 hours each. I'm nearly done.

Bill, the welder, got started on Thursday. I'd had the axle shipped to him from Axis. It's a 5000 pound axle, derated to 4200 pounds, with 12 inch brakes, the zerk fitting for the bearings, and their high profile mount. Fit was just perfect with the only hitch being some concern about clearance for the shocks and we'll probably look at that tomorrow. Otherwise, everything is good: she sits up a little higher but I still have about a foot of clearance under the tanks hanging below the frame and I think the wheels I got from Marc look pretty cool. 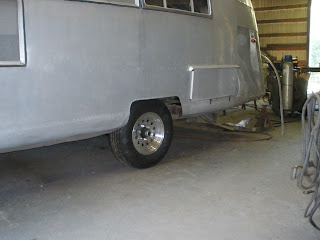 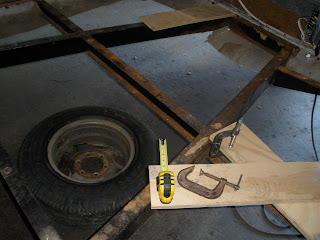 The spare tire is going inside the A frame which means one more crossmember has to move a little bit. We're still kicking ideas around about the mount. Thinking about using a pulley system with some mechanical advantage to lift the tire up and then held up by studs and lug bolts. Ideas appreciated here. I've searched all the threads I can think of and can't really find anyone doing it quite this way, but we're thinking it's pretty simple and strong and out of the way better than most other ways. 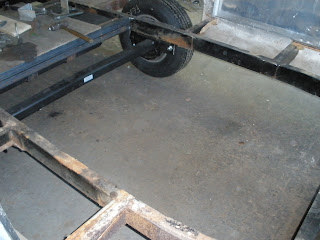 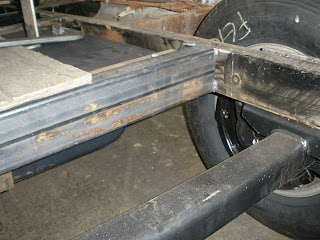 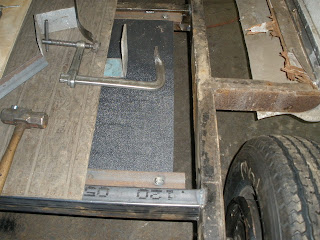 Inside, my frame is in remarkably good condition. The aft crossmember is rusted out and gets cut out and replaced this afternoon. My trailer has the steel plate riveted in up front, but not in the rear, so we're adding one there as well. There's rust and damage on the step and it's forward outrigger that will need some work too. 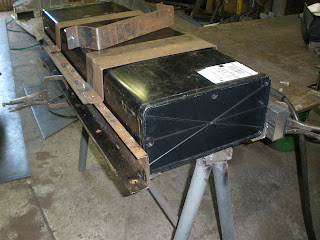 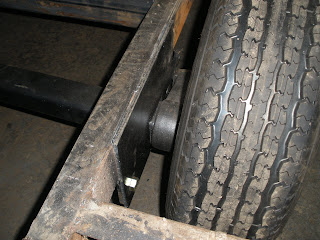 It is so much fun actually putting things into the trailer instead of ripping it apart. It's a really good time.
Posted by pbear at 2:48 PM