Not Quite Back in the Saddle Again

I’ve finally gotten the ok from the surgeon to start putting weight on the bad ankle, and just as important, he says I can take the boot off the ankle so I can drive.  I’ve really missed my Airstream.

Since we’ve lived on a small sailboat with uncomfortable seating for 22 years, I really wanted two comfortable recliners in the place of the gaucho.  I’m not changing much of the original cabinetry in the trailer, but I’ve been planning for this one all along.  I purchased the two recliners with a center console just before I broke the ankle.  The plan is to replace that center console with my own, done in birch to match the original wood.  The console has an armrest that will transfer to the new one easily and also has brackets that hold the chairs in place so they can’t slide.

I’m still not fully back into work mode, but I got some 1x2’s this week and plugged in the hot glue gun and started making a rough mockup of the new console and the cabinet in the forward end (behind the chairs) that will hold the batteries, converter, inverter, and the circuit breaker panels.  This way I can plan the wire runs to the panels and also fit everything so that we maximize storage but still allow the chairs to fully recline. 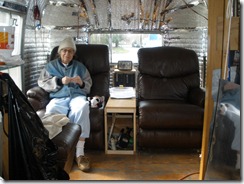 Pam and her two favorite teddy bears tried out one of the chairs today.

My broken ankle made me miss the first anniversary of the Island Girl project.  Seems like a lot of time and not much work until I look at all the pictures from the past year and realize I really have done quite a bit.  A year after getting the trailer we also now have a tow vehicle for the first time, buying a first generation Toyota Tundra this week.  I’m pretty sure our old Chevy Tracker will fit in the Tundra’s bed.  Hopefully by anniversary two, while probably not done, we’ll be able to actually do some camping.