In the fall when we moved from the shady but soon to be muddy spot to the drier location for the wet winter, our original tongue jack failed.  I got a replacement quickly, but cold and wet soon set in and that job was put off in favor of the inside jobs I did during the winter.

I had all day to work on the trailer today and the temperature hit 60 for the first time this year, so it was a good day to tackle the jack.  As it turned out, I needed nearly all day as the old one was a bugger to get out.

It was fastened with 4 3/8” steel rivets.  I ground off the heads hoping I could then drive the rest through, but no go.  I drilled them out, but it still wouldn’t budge.  I then attacked the thing with my trusty old Makita grinder and a couple hours later, just as the grinder went up in smoke, the jack finally gave up and came out. 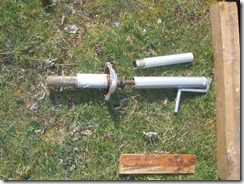 The new one slid right in and fastened with grade 8 bolts.  Nice to see the trailer sitting on a jack instead of all blocked up like it’s been. 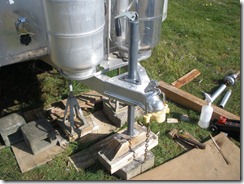 I was sure I’d stripped the Zolatone from both of the upper interior panels that will hopefully go back in this week.  I was sure but I was wrong.  One panel needed stripping and it’s the usual fight trying to get the Zolatone off.  This picture is after three coats of stripper.  Clearly more to go. 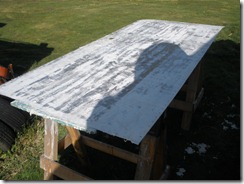 Got an email from the son of the original owners of Island Girl when I got home from the “jackfest” and that really made my day.  Lots of info about the trailer and it’s tow vehicles that I’ll be going through tonight.  She went from Chicago to the Seattle World’s Fair!