Marcus advised me to try Aircraft Stripper, the nastiest stuff available, for stripping off the old Zolatone. I was too stubborn to follow good advice until I had used up all the other stuff I had. Finally got to that point today and got a gallon of the good stuff. Sort of goes pop when the cap is unscrewed and it has plenty of dire warnings written on the can. You are warned against using Aircraft Stripper on airplanes. No warnings concerning Airstreams. 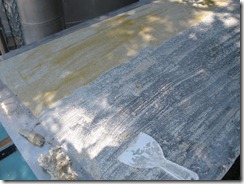 It smells awful and you don't want to get it on your skin, but it does seem to get much more off on the first pass. It'll still take about three applications to get rid of the Zolatone. I'm now doing the lower interior skins that won't be replaced by Baltic Birch. The end of stripping is in sight. 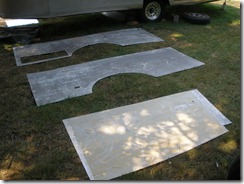 Up front, I'm fitting the lower panels in birch. Once they're in, I can start on the cabinet that will house the batteries and the rest of the electrics. 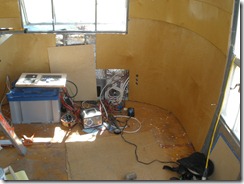 Meanwhile, Pam, who loves to "talk" to that girl she sees in the mirror, found a really huge girl to talk to inside the trailer. 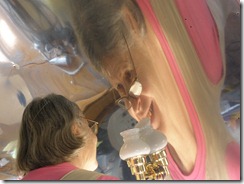