First, apologies for not blogging recently.  I have been working on Island Girl, but mostly on the belly pan.  I was advised to be patient on this task by the Someday 59's and I have really tried to do that.  But, I’m a month or so into it and it isn’t yet done, close but not done.  I’ve not yet thrown any tools, but I have walked away from it several days.

Even at this incomplete stage, the trailer looks a bunch better.  The worst piece of the old pan was right by the door, so you had to look at it all the time. 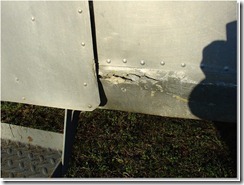 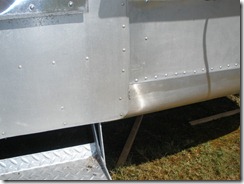 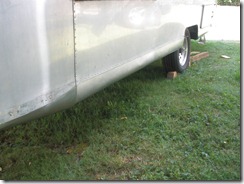 But it hasn’t been a fun task and I’ll be glad when it’s totally done.  Since my fresh water and grey tanks extend down, the pan isn’t solid underneath.  I used 5052 aluminum, .025 on the ends with the curves and .032 on the straight bits.  The Wide Flange Rivets from VTS are really good for fastening underneath.

This post, though, is supposed to be about the dangers of assumptions.  I’ve dealt with 12 volt electrical systems for years and didn’t expect any troubles with the system on the trailer.  Since I had no battery installed, I didn’t do a lot of checking of my work.  It’s simple:  what could go wrong?

Recently got the batteries in place, so I’ve gotten most of the lights installed.  Everything has worked just fine, except for those three LED puck lights running down the overhead center.  How could they not work?  The fix involved drilling out an eight foot line of bucked rivets and pulling one whole side of the overhead down to get access, just a few hours of work.  The troubleshooting was easy:  I had a loop of positive wire between two of the lights that should have been cut and wired into the light circuit, but wasn’t.  Stupid mistake that could have so easily been checked earlier.  What could go wrong?

Everything works now, though.  I’ll get the solar hooked up in a day or so and we’ll be able to use our Fantastic Vents as it looks like we’ve finally made it to warm weather. 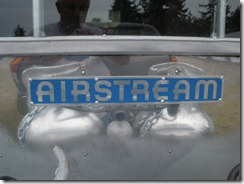 And we even got to tow for the first time, all of about 100 yards to move from a sunny spot to a shady spot for the summer! 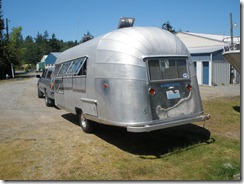