We took the trailer to our first rally last year at the Tin Can Tourist Rally in Lynden, WA, only twelve miles away.  Island Girl was an empty shell then, Alzheimer’s wouldn’t let us stay, and the weather was lousy.  This year we got to do it right with a nearly complete trailer, and no problems from Alzheimer’s as we’re living in the trailer fulltime anyway.  And, the weather was perfect.  Lynden is a great, laid back rally where everyone is just into old trailers and some cool old cars as well. 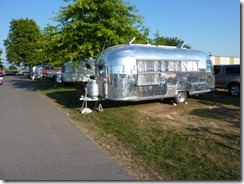 Saturday afternoon a fella came to the door who greeted me with “You have no idea who I am.”  When he said his name, though, I did know him as Harold was the son of the original owners of the trailer.  He and his wife (they celebrated their honeymoon in the trailer) were visiting friends, had no knowledge of the rally, but happened to drive by when their planned route was closed for construction.  They figured they’d just take a drive through the fairgrounds and look at some trailers, but happened to drive by one that was the same model his family had owned.
But, he saw the wheels and knew it was the trailer, not just the model.  If you’ve followed this blog, you know we’d earlier made an email and telephone connection.  He’d seen pictures and knew, even though we’d not been in contact for a year or so. 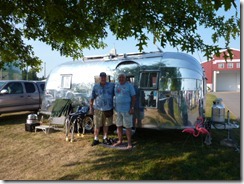 He and his mom have been on my mind.  We’d  earlier made tentative plans to ride the ferry out to Lopez Island to let her see her trailer when we got done with the work.  The weather is good, things are fairly stable with Pam, so it’s a good time to make the trip, especially since Harold and Kathy are heading to Lopez for a month to celebrate his Mom’s 94th birthday.  We’re going to try really hard to make the trip out there next week.
Very very hard to wipe the smile off my face right now.
Posted by pbear at 5:27 PM