I See Grass Instead of a Floor

Lots of little stuff still to do in the destruction phase:  break off all the old elevator bolts with vise grips, get the wheel wells out, use a wire brush in my drill to knock the rust off the frame, and remove some of the last bits of subfloor.  But, I am nearly to the end of the take apart part and I'll be glad to see it end.  I love the creative part of planning ahead and thinking of changes and how I want the whole thing to fit together, but there's nothing really creative about ripping all the stuff out of the trailer.

Since I'm parked in the grass, I left the belly pan on so I could clean out all the garbage from the top:  old insulation, mouse condos, dirt (lots of that).  My C channel holding the shell to the floor is in good shape, so I didn't really want to drill out all those rivets to drop the pan.  I left about a foot of it from the rivet line and cut it off from there, in effect leaving a border I can use to reattach it later.  Lots of damage under the bath area, including a really super patch made from an aluminum can, but most of the old pan looks to be reusable. 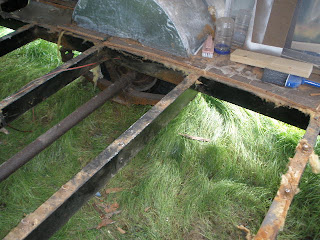 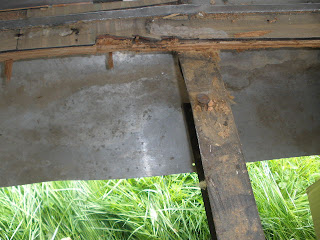 Bought a new tool for the job, Dewalt Electric Metal Shears, and they made short work of cutting off the belly pan.  Lots of money, but they'll also get lots of use ahead on the project.

The grey water tank arrived too.  It's a 33 gallon ABS plastic tank from Icon Technologies and measures 48" x 33" x 8".  Definitely have to move at least one crossmember to install it, but the size will be nice to have.  Kudos to Icon Technologies for the packing they did on the tank:  full cardboard box that was extremely well padded inside.  Shipped quickly too, but it did spend a couple of days clearing customs. 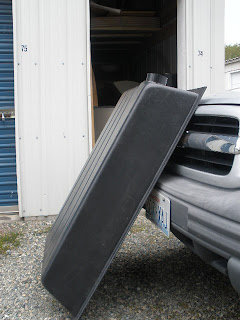 Haven't heard on the axle from Colin, but that's fine as there's still plenty to do.  Really want to get my lights squared away for the trip to the welder.  Lots of elevator bolts to break and remove.

Since I live on a boat, I'll still need a boat when I someday go to fulltiming on Island Girl.  My kayak project, a Pygmy Golden Eye Hi, is nearly done.  Mostly just needs a killer varnish job on the deck. 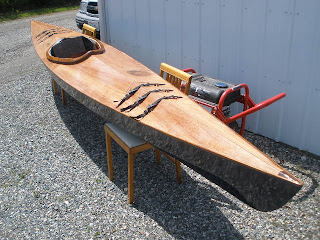