Haven't posted in a month, but I have been busy.  Island Girl is empty as I've removed all the cabinetry, lower inside skin panels, and am now in the process of pulling up the old plywood subfloor. 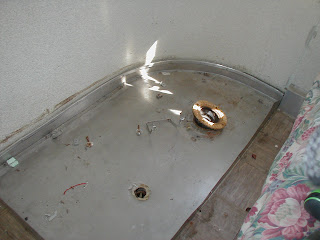 I've read stories of great difficulty removing the bathroom, but mine came out very easily.  Nice and shiny behind the interior panels and nearly all of the old insulation was clean and dry. 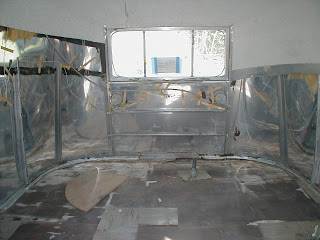 The C channel holding the floor to the frame and shell is in very good shape and most of it can be reused.  Hard for me to believe that what I'm seeing is a 52 year old trailer. 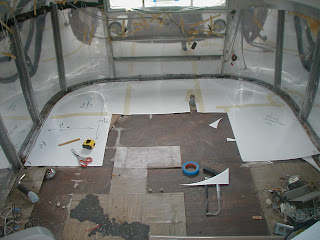 Since the plywood is in really poor shape on both ends, I made a cardboard template to allow me to cut the end pieces of new plywood to shape. 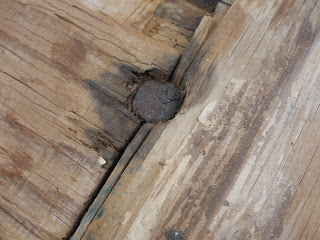 Surprising to me that the elevator bolts holding the plywood down are installed at the joint between two pieces of plywood, really just acting as a clamp.  I think I'll likely make my plywood joints away from the crossmembers and use a strip of ply underneath as a doubler.

All along, I've wondered what kind of shape my frame was in.  It's hard to see without dropping the belly pan, so I've been concerned until today when the first sections of old subfloor came up.  For the most part, I've got a frame that is still painted and showing just some minor surface rust, much of it from the original floor insulation sandwiched between the frame and the plywood.  A little more serious rust in the rear streetside, but even it doesn't look too bad. 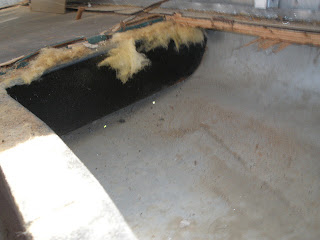