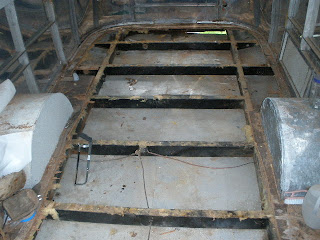 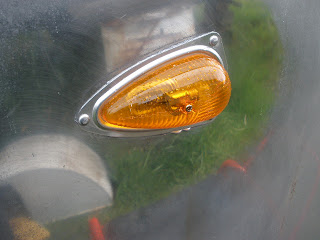 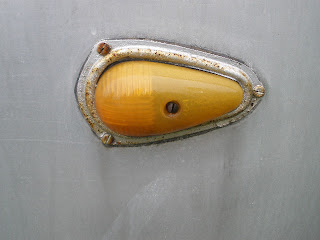 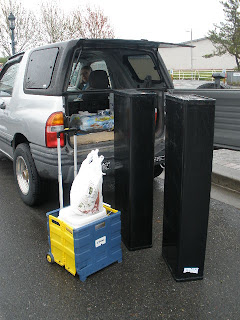 With the old subfloor nearly up, I've been working on tanks and a new axle.  Once the floor is completely up and cleaned out, I'll drop the belly pan, probably by cutting it and leaving a 12 inch border.  Before I can tackle new floor, I need to get my tanks in, get some welding done, and replace my axle.

Tanks are hard to find in stock sizes that fit my frame, but custom tanks are more expensive.  The other thing that makes it hard, at least for me, is that while I basically know what I want for tank sizes and placement, I don't really know where I'll want fittings yet--I can't think that far ahead.  My black tank will be above the floor, so it's no problem now, but the grey and fresh go in the frame.  I decided to get ABS tanks for both largely because I can easily weld in fittings later with ABS cement.  Bought two 24 gallon Valterra fresh tanks that measure 8" x 16" x 48".  That's more capacity than I need, but gives me flexibility.  The ABS Grey tank came from Icon Technologies in Canada, measures 8" x 33" x 48" and holds 33 gallons.  I'll have to get some crossmembers in the frame moved, but they'll fit easily in the 51" I have inside the main frame rails.

Colin Hyde in New York has been running one of the premiere Airstream restoration facilities .  I emailed him about some axle decisions and happened to time it just as he is busy setting up a new company on his own.  I know he's busy and he's got a lot on his mind right now, but even so he probably spent nearly an hour on the phone with me going over options for my installation.  Cannot thank Colin enough.  He's the best.  He'll be ordering me a new torsion axle from Axis, replacing my old spring axle setup.  It'll be a 5000 pound axle derated to 4200, which should give me quite a bit of latitude in the way I setup and load the trailer.  It'll get shipped to my welder, so axle and tanks can all go in at the same time.  Big steps forward! 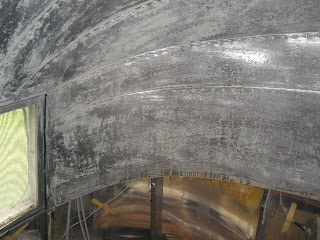 Started stripping my rear endcap, too.  The old Zolatone is coming off, but this is not going to be one of my favorite jobs.  Kicking around the idea of having polished aluminum on the upper inside and baltic birch replacing the lower inside aluminum.  Not sure yet, just thinking.