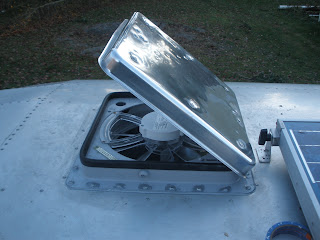 Seems like it rained every day in November, but December has started off dry and we even saw the sun. Looks like a couple of dry days ahead, so started mounting the Fantastic Vents today. One is in and the other tomorrow.

I'm really pleased with the old Hehr cover mod. Didn't really know if it would show, but that nice shiny inside with the Hehr logo shows up well from inside with the vents extended.

Based mostly on some VAP discussion of Fantastic Vent installs, I bedded it in silicone (as Vulkem seems not to stick to the plastic) and used stainless pan head screws (1/2" #10) with washers to screw the flange down. Didn't use the supplied gasket, just lots of silicone. Laid a blue masking tape line down around the perimeter and that controlled the mess. 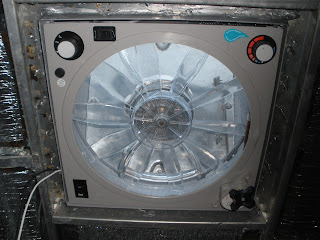 One goof. I ordered the inside trim piece with the curve, but it's clearly too much for my roof (which is really pretty flat right on top). Should have ordered the flat trim piece, but it'll be easy enough to trim. 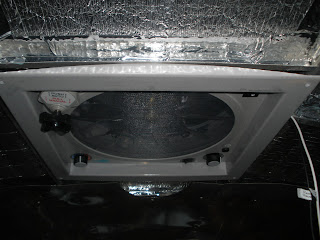 As a follow up on my trailer's history, I got a phone call a week or so ago from the son of the original owners. He says he visits his mom about once a month and will get some info together for me next time he goes to see her on the island. Told me he clearly remembers the trailer arriving (he was in high school at the time) and that his parents had gone to Jackson Center to pick up a Bubble, but had gotten such a good deal on the Caravanner that they went with the bigger trailer. R.J. Dial's site says only one Bubble was made in Ohio that year, so maybe that had something to do with it too. Anyway, it looks like I'll get some nice info on my trailer's past (he said it was their baby and went everywhere with it) so that's really exciting to me.
Posted by pbear at 8:51 PM