The trailer originally had no holding tanks.  Not many changes in the space except for the addition of the holding tank, but I really want it to function well as a wet bath. 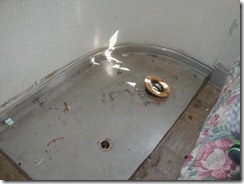 That’s the way the shower pan looked when I took it out in the gutting process.  I’ve decided to reuse it, just shortening to fit the new space and a bit of polishing. 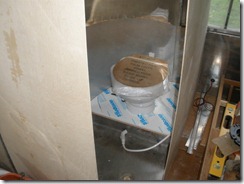 New bulkheads are rough cut, the tank is in place, and the shower pan is smaller.  I’ll be using white FRP panels on the inside of the bulkheads and the aluminum will be painted white. 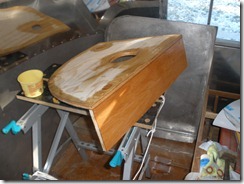 5/8’s ply will sit on top of the tank and 1/2” King Starboard will form the visible surface. 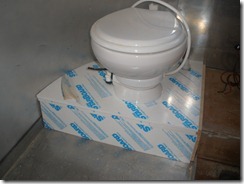 I’ve seen Starboard, but have never used it.  It works like wood, cuts easily, and can be fastened with screws.  It should give me a nice waterproof surface that will be easy to keep clean. 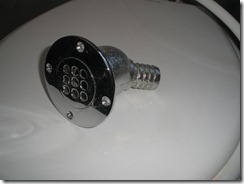 This Perko marine scupper drain (used to drain the cockpit on a boat) is the shower drain fitting.  It has a simple check valve in it, just a floating rubber ball.  It’ll use marine sanitation hose to form a P trap before running forward to the gray tank.  I’ve also dished out the subfloor surface around the drain to encourage the shower pan to drain.

Last post of the year and nearly two years into the project.  Hard to believe it’s been that long, but there’s clearly light at the end of the tunnel now.