When You Simply Cannot See the Obvious

I’ve been hard at work in the bathroom and what I’ve done has been going slowly, but well. 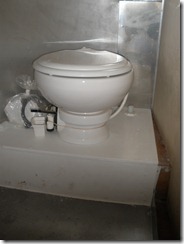 There is one problem that I’ve spent hours and hours thinking about, trying to solve it in the best way. 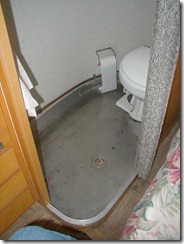 In the original, Island Girl had a flat shower pan, water lines for the shower running around the perimeter, and the shower head mounted on the bulkhead to the left in the picture above. 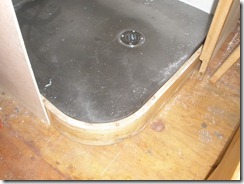 The new bulkheads are slightly wider than the old and there will be a small cabinet on the right, between the rear bulkhead and the bed in an area that used to be a narrow strip of tile.  I’d very much like to route the water lines in a cleaner appearing way than just screwed to the wall as they were.  I want the wet bath to function well as a shower and be easy to clean.

There will be a new laminated piece going around the curved door opening and I’d thought I might make that piece wide enough to hide the water line routing inside it.  Complicated, but it would work and keep the clean appearance.

Usually, when I’m struggling with how to execute an idea, I ask my friend Dusty for advice.  He drove over today while Pam and I were at the trailer and he took a look at what I’d planned.  I don’t think he had any real reason to be there except that I had asked for help earlier in the day back on the boat.  Didn’t take him long to ask me why the shower had to be mounted on the side bulkhead as original instead of the rear bulkhead.  Clearly there was no reason.  Using the rear bulkhead the water lines and shower mixing valve could easily be hidden in the new cabinet next to the bed.

He’s exactly right and it’s a much better way to do it:  simple, shorter water run and keeps the water lines and fittings away from a space that will later house the computer.  Good friends are good to have.

Why couldn’t I see this on my own?