For the two years I’ve been working on Island Girl, my hope has been to face  new refrigerator with the original 50’s door from the old Marvel she came with. 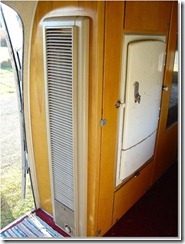 A Dometic RM2510 seemed to be the closest in size and among the most important measurements was the width of the freezer door which was just small enough to clear the Marvel door frame.  The inside height of the Dometic was greater, but everything looked like it could be done.

When it arrived, almost all the measurements worked out.  Depth would be tight in the cabinet, but the door mod could be done.  Second thoughts began to creep in when I opened the Dometic door and looked at all the storage in the door itself and all that would go away if I used the Marvel door.

I asked everyone I knew, including all the great people from Hospice who have been coming by for Pam (and me), for their advice on how I should go forward.  Function is going to win out, especially since I’ve departed from the pure original vintage trailer in quite a few areas.

Depth, though, was a problem not solved until I removed a bit of interior skin.  I made up an airfoil shaped piece of aluminum to replace my cutout and my riveting buddy Jim came over to  help put it in place.  At the same time, I lowered the fridge mount as far as I could in the cabinet, down to the top of the wheel well.  Then it finally agreed to slide right in with a perfect fit. 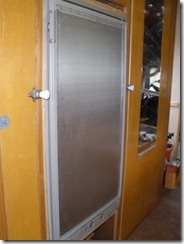 I’ve been working most recently on the vent, making that out of some of the salvaged aluminum interior skins that I’ve replaced with birch. 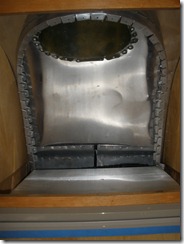 And instead of that cool Marvel door, it’ll be standard Dometic, but done in birch. 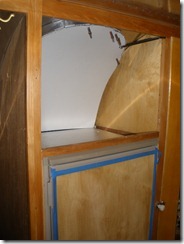 No vintage fridge door also means that the vintage stove makes less sense, so I’ve got a new stove going in opposite the refrigerator.  The new one avoids a clearance problem with the water heater that would have been an issue with the original.  If anyone needs a 50’s Princess stove, you’re welcome to come pick mine up. 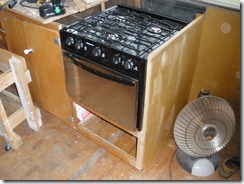 On the left in that last picture is the platform on casters that I made up to make it easier to move the new fridge in and out during the install.  It’s made life much easier.