The Rain Has Come Back to the Pacific Northwet 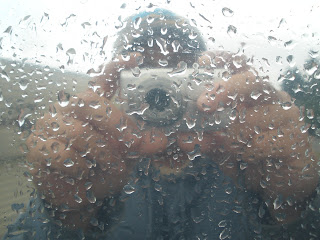 I've got nearly all of the fasteners in the subfloor, lacking only a few in the C channel corners where I need some help backing the nuts in those spots where access is really tight. Those bolts that go through the outriggers and C channel have been time consuming too as I've had to do them one at a time with a pair of vice grips holding the bolt head on the bottom while I tighten the nut from the top. Rest of the floor has had the bolt head indentations and seams filled with thickened epoxy. 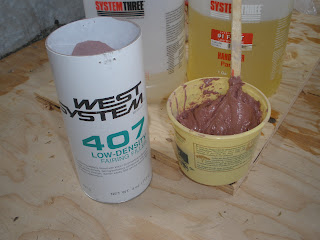 The plan was to epoxy the topside of the subfloor (like the bottom side is already done) and lay one layer of fiberglass cloth in the areas covered by cabinets. I'm now just going to lay that layer of cloth over the whole floor--cloth is cheap, I'm using the epoxy anyway, and it's just as easy to do. Overkill, I'm sure, but it'll give me a virtually waterproof subfloor. First section got laid down today. 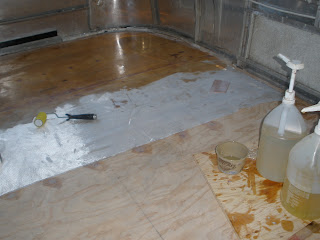 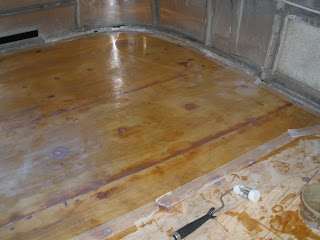 I'd put in bunches of hours earlier stripping and polishing the rear inside end cap, but it just wasn't coming around. It has something like etching from the old Zolatone on it--feels smooth to the touch, but it isn't. Somebody came by and looked at it and suggested S.O.S pads and the thought of little rusty bits of steel scared me to death. Today I sanded a small piece as a test and then moved on to the endcap itself. I started with 400 grit and moved up grade by grade until it was done with 1000 grit, cleaned it with mineral spirits, and then polished again with G6 and then F7. Huge improvement and hopefully it shows in the photos (hard to take pics of shiny stuff!). Some of the etching is still there, but much is gone. Maybe I could go over it again starting with 320, but I hate to get too aggressive with it. 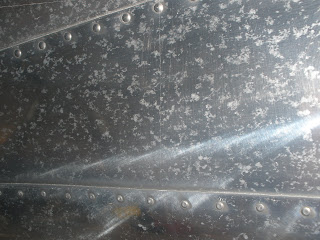 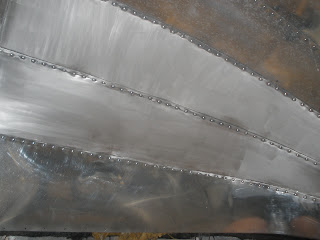 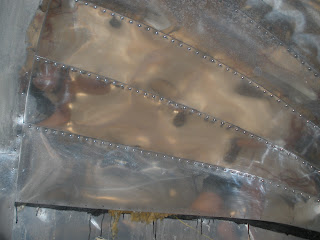